Do not waste LN2 by evaporation in the large tanks waiting in the corridors and laboratories. CNP series liquid nitrogen, oxygen and argon generators completely eliminate the delivery and storage problems for LN2 that is available what you need, when you need and wherever you need.

The technology used in new generation liquid nitrogen generators purify nitrogen from air around the plant and convert to LN2. You can fill your dispensing thermos or transfer LN2 via a flexible hose to an external dewar with a simple push of the button. LN2 transfer is independent from the system’s operation mode. The PLC automatically re-starts when the level drops to 70% in the internal storage dewar, then will stop the plant when the dewar is full and goes into standby mode until some LN2 is transferred.

Imtek Cryogenics offers a wide range of Nitrogen Liquefiers with capacities between 10 and 500 lt/day or larger. Contact Imtek Cryogenics for all your cryogenic applications and custom-made solutions.

The atmospheric air is pressurized by a compressor and fed to a buffer tank. The pressurized air in the buffer tank, then, directed to the filter group which are located behind the cryoplant in order to separate water droplets and microscopic contaminants from the air. After this first filtering step, remaining moisture in the air is removed by the internal air dryer unit.

The treated dry and clean air with a dew point of -70 °C flows to one of the adsorber beds of the Pressure Swing Adsorption (PSA) module. The carbon molecular sieve in PSA beds adsorbs the oxygen and carbon dioxide molecules in the dry air.

Therefore, by the PSA technology utilized in cryoplants, nitrogen gas at the correct purity level is provided to liquefier. This pure nitrogen gas, then, is exposed through the buffer tank to the cryocooler that is located vertically in a cryogenic storage vessel. 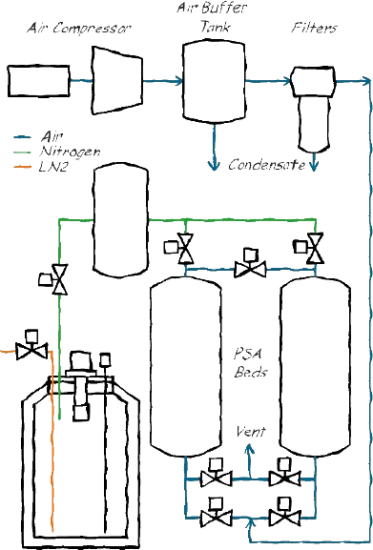